Having lost Kita the previous autumn, we called Brenda to put out feelers regarding filling the dog shaped space in our family. This was around Christmas 2010, and by mid-January 2011 we found ourselves heading from Falmouth up to Lancashire to meet Snowy, a seven-year-old male.His mum’s circumstances had changed through no fault of her own, and she resolved to find a new home for him, even though it broke her heart to do so. Via Brenda, we’d sent pictures of our home and garden, and told her all about our other rescue Samoyeds, and we were thrilled that on meeting us and going on a long walk together, she thought us, worthy adoptive owners. Before we knew it, we were driving home with the most talkative dog in the world! We’d known Brenda and John by phone for close on fifteen years but had never met. Because we were passing, we arranged to meet in a service station on the way home, and we all sat and admired Snowy in the winter sunshine. What a beautiful boy. He was (and still is) slightly built, with a wonderful coat. He’s quite fine featured, has a puppyish mask and a lovely smile. We’d already fallen for him!

On our return home, Snowy was understandably unsettled and anxious. His first night with us was, err, noisy. We took it in turns to come down and check on him every couple of hours the first few nights, and within a week he was sleeping peacefully, right through. Our routine has always been to walk from six till seven every morning, and again in the evening, plus trips to the fields, woods and beach at every opportunity, and I think burning off the nervous energy in this way helped him settle. We have chickens, and it took about a month before we could completely trust him not to chase them. This was achieved using a reel-lead, verbal commands and lots of doggie treats. He’s an honorary chicken now, or maybe the chickens are honorary dogs!

If he had a fault, it was that on the lead, he would bark insistently at any other dogs. Off the lead in the woods, fields or beach he was fine, but simply a different dog on the lead. This has been a really hard habit to break, and even though he’s a hundred times better, he still has his moments. He’s never shown any aggression at all, he’s just desperate to get over to them, and do dog stuff. We still have to distract him with treats sometimes. We suspect he knows the score, and that now he’s playing us for the fools we are!

Snowy is a digger, and his favourite outside activity is to dig a Snowy size hole in the garden, and then lie in it. He also likes to undermine the legs of picnic tables at the café on the beach. After 10 minutes of digging, one table leg will slip into the hole, and the coffees slosh everywhere. He’s become really comfortable in the sea and charges around tirelessly. He doesn’t seem to pay for it later either, perhaps because he’s so slight. He’s by far the most affectionate Samoyed we’ve had, and he’ll seek us out when he wants a fuss, which is pretty much all the time. He lies on his back with his legs in the air, and talks at us until a fuss is forthcoming. He’ll be ten this year. People are always surprised at this, thinking he’s an adolescent, such are his youthful good looks and bouncy behaviour.

We still email Snowy’s mum and send her photos from time to time, and she us. We’ll never forget what a trauma it was for her to give him up, and we felt her pain as we drove away that day. She knows we love him dearly, and that we take our responsibility to him very seriously. We really can’t imagine life without him. 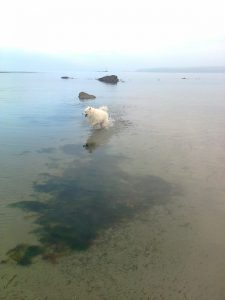 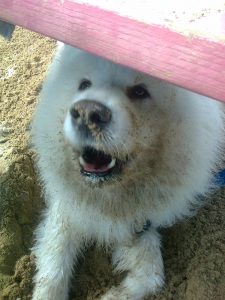 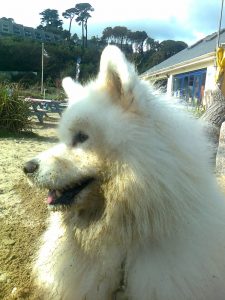 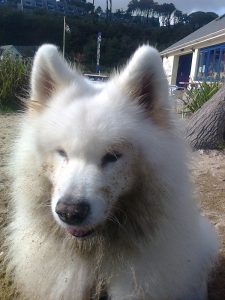 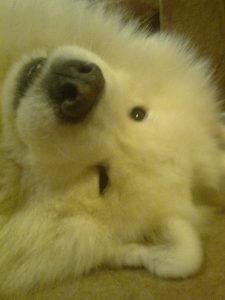 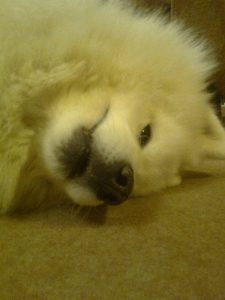 Lulu’s Story I can’t remember my very first owners now but for some reason five years ago I found myself in Leigh Cats and Dogs Home. Eventually, I was adopted from the home by a lady who called me Sasha. Unfortunately, I was young and a bit of a handful then and she couldn’t cope… END_OF_DOCUMENT_TOKEN_TO_BE_REPLACED

Gem’s Story Hello, my name is Gem and Brenda arranged for my new mum and dad to adopt me earlier this year. Dad fetched me from Devon, I travelled all the way to Hampshire sat on the front seat of the car, checking out the scenery and listening to my dad telling me about where… END_OF_DOCUMENT_TOKEN_TO_BE_REPLACED

Quinn’s Story I will never forget the day I first met my best pal, I was four years old, sitting in the back of dad’s car feeling like I would burst with excitement. As we pulled into the Service Station somewhere near Birmingham, from across the car park I heard loud barking.  It was a… END_OF_DOCUMENT_TOKEN_TO_BE_REPLACED

Nanook’s Story My name is Nanook and I am 2 years’ old.  Right now my life couldn’t be better, but it wasn’t always like this.  I spent the first very traumatic 6 months of my life shut in a cage in a pet shop until Brenda rescued me.  When Mum and Dad finally took me… END_OF_DOCUMENT_TOKEN_TO_BE_REPLACED

Alfie’s Story Hi, my name is Alfie, I think you might be interested in my story. I am an 8yr old male living in Chester UK. My mum and dad took me home in May last year after being in kennels for quite a while. When they came for me I had had a muzzle… END_OF_DOCUMENT_TOKEN_TO_BE_REPLACED

More news of Storm It’s getting very cold and snowy up here. I’ve been taking Storm up to Scotland to get him used to being out and about far from home, staying in strange places, and seeing if he enjoys the hills. Well, it been a huge success and he is becoming so fit now, that… END_OF_DOCUMENT_TOKEN_TO_BE_REPLACED

Sasha’s Story In March 2005 I made a long journey in several cars with some very kind people to my new home. My new Mum and Dad were delighted to see me. They had just recently talked to Brenda about sharing their home with a Samoyed. Two years earlier their beloved Snowy had died. Having eventually… END_OF_DOCUMENT_TOKEN_TO_BE_REPLACED

Storm’s Story Mum, Barney the Westie & I drove 3 hours to meet Storm. Nervous? Yes! Excited? You bet! Was I disappointed? ‘Course not! Storm is a Samoyed & they are many things but NEVER a disappointment. Storm is a 9-year old big hairy mass of love. At first, he was quiet & seemed scared,… END_OF_DOCUMENT_TOKEN_TO_BE_REPLACED

Charlie’s Diary Entry One I will start from where I can remember. Saturday 14th July. Mum and Dad have taken me to Runswick Bay. I have had a lovely walk on the beach; we have had lunch in the pub (well Mum and Dad have). We have sat on the beach and had a nice time… END_OF_DOCUMENT_TOKEN_TO_BE_REPLACED